There are eight main Croatia airports which serves international flights and eleven smaller regional airports for traveling within the country or for sports and recreational purposes.

Traveling to or around Croatia can be quite complicated and it require smart planning and scheduling whether you are traveling from North America, Australia, Europe or within the Croatia.

Main reason for this is not bad infrastructure or poor connections with the rest of the world, but the unusually contoured territory of Croatia. 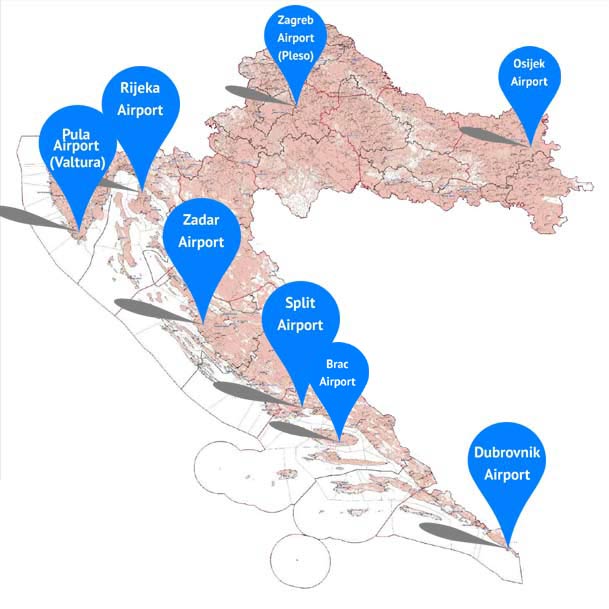 Zagreb international airport is leading airport in Croatia if looking at the number of arrivals.

However airports in Split, Dubrovink, Zadar and Rijeka every year slowly overtaking the number of arrivals and departures to Zagreb airport.

International airport in Zagreb is located 18km from city center of Zagreb in town Velika Gorica.

Zagreb airport is also know as Pleso Airport by part of town Velika Gorica where is airport located.

Pleso airport accepts over 3 million passengers per year from international and inland flights.

Zagreb city gets its own airport in 1909 in part of town called Črnomerec and later in 1959 it was relocated in Pleso, Velika Gorica where it is today.

Currently Zagreb airport is expanding and there will be built a second terminal for receiving passengers from international flights.

Second largest airport in Croatia it terms of served passengers, around 3.3 million in 2019.

International airport in Split is located in suburban area Of Split in town of Kaštela which are 22 km away from historical center of Split and just 11 km from center of UNESCO protected Trogir town.

Second name for Split Airport is Resnik again owes its name by part of town where is located.

In mid-2019, a new 35,000 square meter terminal has been opened at Split Airport for receiving international flights

Dubrovnik International airport is located in 13 km away from city center in village Ćilipi after which Dubrovnik Airport was named.

Due to huge interest of travelers around the world for Dubrovnik and increased number of flights Dubrovnik terminal has been under construction for new terminal.

New terminal has been finished in February of 2017 and now international airport Dubrovnik have largest terminal among all Croatia airports and it has capacity of over 2 millions passengers a year.

Zadar Airport is located in Zemunik Donji just 8km away from center of Zadar.

Zadar airport accepts every year around half million passengers from international flights and these numbers constantly growing every year.

It is well connected with rest of the Europe due to low cost airline companies such as:Ryan Air, GermanWings and Lufthansa.

International Airport Rijeka is located in town Omišalj on Krk Island just 17km away from city center of Rijeka.

When you get there you can easily reach Rijeka with regular bus line, tax service or rent a car.

Island of Krk is connected with mainland with Krk bridge.

Pula International airport is located just 7km away from center of Pula in Valtura part of city.

Osijek Airport is loacted 20km away from center of city Osijek in Čepin village.

There are Only a few international flights to Osijek from London, Budapest and Novi Sad mainly during the summer season.

International airport on Brač island is located in Veško Polje on 541 meter above sea level.

It is only 14 km away from town of Bol where is one of the most beautiful beaches in Croatia located; Zlatni Rat and 30 kilometers away from Supetar largest town on island.

We use cookies to ensure that we give you the best experience on our website. If you continue to use this site we will assume that you are happy with it.OkRead more